Texas Black Bear Alliance
﻿
Black bears (Ursus americanus) are the most common and widely distributed of the three bear species in North America, which include grizzly bears and polar bears.  The historic range of black bears in North America included the major forested areas in America, Canada, and northern Mexico.  Today, their status and density vary considerably within the current existing range. 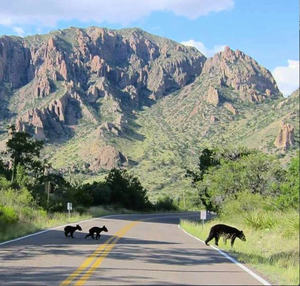 Big Bend National Park, 2015
The black bear, whose range once spanned the state of Texas, has begun to reappear in portions of its native habitat after original populations were devastated by loss of habitat and over harvesting throughout the 19th and 20th centuries.

According to Texas Parks and Wildlife, at least two subspecies of black bear currently occupy Texas: the Mexican black bear (Ursus americanus eremicus) and the New Mexico black bear (Ursus americanus amblyceps). Both of these subspecies are found in West Texas desert scrub or woodland habitats within the Chisos and Guadalupe Mountain ranges. There is a small but growing population in the Big Bend and Guadalupe National Park regions thanks to natural recolonization from adjacent populations in Mexico and New Mexico. Both subspecies are state-listed as endangered in Texas.

In East Texas, there is no stable breeding population of black bear; however, since Texas Parks and Wildlife began investigating and documenting sightings in 1977, there does appear to be a non-residential, primarily transient population of black bears in the region. This is due in large part to the stable or growing populations of black bears in the surrounding states of Louisiana, Arkansas, and Oklahoma. The American black bear and the subspecies Louisiana black bear (Ursus americanus luteolus) compose this currently non-residential population in East Texas. Researchers believe these bears are primarily males searching for food, territory, or females with which to mate. In 2011, a female black bear of mating age was documented in Red River County; however, she has not been seen again since that time. Both the American black bear and the Louisiana black bear are state-listed as Threatened.
﻿﻿

Because black bears are still considered a rare species in the state, Texas Parks and Wildlife Department investigates each reported sighting. Biologists depend on reported sightings to gain a better understanding of recolonization rates of black bears in Texas. By having an understanding of the number and rate at which black bears are returning to Texas, biologists can better develop and direct wildlife management plans for the species, as well as education and outreach activities in the communities adjacent to black bear habitat. These sightings are confidential, and landowners are in no way obligated to institute any sort of land management practice on their property if a bear sighting is confirmed.

Based on the results of the investigation, sightings are divided into a three-tiered classification system:
​
Class I sightings provide verifiable physical evidence such as scat, a paw print, fur, or a photograph.

Class II sightings are detailed accounts provided by an experienced observer such as a biologist or veteran outdoors person, but provide no physical evidence.

Class III sightings include reported sightings that are vague and/or the account of the animal seen is not consistent with the image or behavior of a bear, or the investigation reveals falsification of essential facts.