“When you are where wild bears live, you learn to pay attention to the rhythm of the land and yourself. Bears not only make the habitat rich, they enrich us just by being.”
-Linda Joe Hunter, Lonesome for Bears: A Woman's Journey in the Tracks of the Wilderness 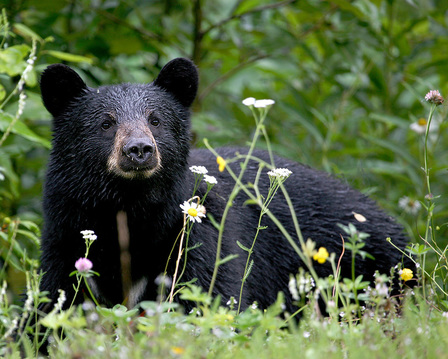 Like humans, black bears vary in appearance. Their fur may range in color (known as phases) from black to brown (or cinnamon phase) to blonde. Their muzzle may be light brown or black as well. Typically in in southern United States, the black bear maintains a black phase with a light brown muzzle. A white blaze may also be present on the chest of the bear. The black color phase is most prevalent in the eastern U.S., while the brown fur phase is most prevalent in the western U.S. Unique white and bluish fur phases occurs on the Pacific coast in the Northwest portions of North America.

Black bears typically have a body length of three to six feet, measured from the tip of the nose to the base of the tail. Adult males are the larger sex, ranging from 150 – 350 pounds, while females generally weigh 120 – 250 pounds. Like humans, bears walk flat-footed on their feet, known as plantigrade. Black bears are generally full grown at four years of age.  Their eyes are small, and their ears are small, rounded, and erect.

Despite being classified as a carnivore, black bears are generally best described as opportunistic feeders, maintaining a typically omnivorous diet. This omnivorous food habit is reflected by the dentition of their teeth, which includes molars with rounded cusps. Roughly 90% of a black bear's diet is vegetative material, with the remaining 10% composed of protein from insects and grubs. Black bears have even been known to raid the nut caches of squirrels. Black bears are not active hunters; however, they will eat carrion.  The major requirements of bear habitat are sufficient cover, dispersal corridors, a great variety and amount of natural, non-anthropomorphic foods, water and sites for denning.
​

Black bears are crepuscular, meaning they are generally active at dawn and dusk.  Breeding and feeding activities at different times of the year may alter this general behavioral pattern.  Where human food or garbage is easily available, individual bears may become primarily active during the day along roadsides and primarily active at night in campgrounds.  Nuisance activities are usually associated with sources of human food or garbage and the very opportunistic feeding behaviors of black bears, who are occasionally seen in accessible fruit orchards, corn fields, and other places in close proximity to natural bear habitats. During periods of inactivity, black bears use day-bed sites in forested habitats; these sites generally consist of a simple, shallow ground depression in the forest leaves.

The feeding activity of black bears normally intensifies as the summer progresses.  This is when black bears leave abundant signs of their presence - scats on game trails, rotten logs broken open, large rocks overturned, opened yellow jacket nests, matted paths through berry patches, broken tree limbs, and climb marks on a variety of fruit producing trees.
​
Black bears are normally solitary except for family groups of females with cubs, breeding pairs in the summer, and congregations of bears at feeding sites where food is seasonally abundant.

Black bears are territorial, possess a high level of intelligence, and exhibit a high degree of curiosity, which explains their exploratory behavior.  Black bears exhibit threat behavior that includes different ear positions, body postures, and vocalizations with their mouth.  They will normally run and climb into the security of dense habitat when frightened or alarmed.
​ 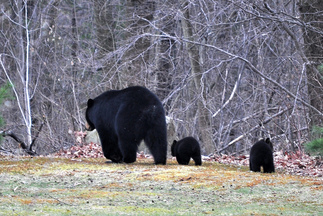 Females reach sexual maturity as young as two years in areas of prime habitat with large amounts of natural food resources available; but generally, black bears reach sexual maturity from three to five years old. May and June are the peak breeding months for the black bear. During this time, the typically solitary animals seek out partners, with females often moving throughout their home range at a higher rate to distribute their scent and advertise receptiveness to males. Males also increase their movements during this time to seek out receptive females. With so much movement, males can lose up to 20% of their fall weight. Females remain in estrus or breeding condition until bred or until the ovarian follicles begin to degenerate.  Within the breeding season, multiple matings may occur for both sexes.  Female black bears are induced ovulators, which means that ovulation occurs only as a result of mating stimulation.

Female bears experience embryonic diapause, otherwise known as delayed implantation. Though an egg is fertilized during the summer mating season, the blastocyst does not implant in the uterine wall. Only if the mother gains enough weight and is sufficiently healthy during the fall does the blastocyst implant and develop. This mechanism is a wonderful adaptation to ensure that unhealthy sows do not use precious energy stores on cubs they cannot physically support. It also serves as a way to ensure that cubs born will have sufficient milk and environmental conditions to survive.

Cubs are born in the mother's winter den. A litter is typically made up of twins, one male and one female; but, depending on the health of the sow, litter sizes can range from one to five cubs.  Cubs weigh eight ounces when born, have no fur, and are entirely dependent on their mother for survival. Females with cubs emerge from winter dens from late March to early May. Cubs stay with their mother through that first summer and fall and den with her through the second winter.

Lactation of the female to feed the cubs normally suppresses estrus and prevents the female from getting into breeding condition once again. Young cubs disperse at approximately 16 months of age in spring or summer, before the female’s next period of estrus.  Thus, the adult female normally breeds every other year. Years with poor food availability can cause reproductive failure. The relatively low reproductive potential of black bears is an important consideration in the management of the species. 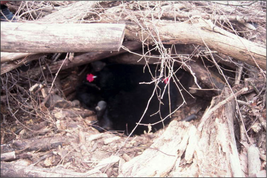 An example of a tranquilized black bear in its winter ground burrow den.
Black bears are not true hibernators, but instead go into a state of torpor, in which their metabolic rate is lowered and activity slows or ceases. In areas such as the Southern U.S. that experience relatively mild winters, bears may den for a period as few as two weeks, if at all. This is due to the availability of year-round natural food sources. Bears are highly adaptable in their choice of denning site. In Louisiana, research has found that bottomland cypress trees with a diameter of greater than 36" is preferred; however, black bears are highly adaptable. They have been known to use ground nests, tree dens, dens with openings at base of trees, ground burrows, caves, or no den at all.